I’m not really into writing trip reports.  There is tons of info already on the internet if you take the time to look for it, and I’m always happy to share a GPX track if someone requests it.  That being said, I go a lot of places where I don’t really recommend other people to go.  I end up off route and bushwhacking on most of my solo trips.  It’s rare that I finish a trip where I don’t have at least a few cuts and bruises.  I don’t feel the need to inflict those wounds on other people.

Today I will make an exception to this rule.  I had such a good time on Mount French that I feel the need to share my joy.  This was easily one of my favourite mountain outings ever!

(Small caveat here, I went through a bit of a mountain withdrawal while I was working on my road running, my joy at being back in the mountains is definitely exaggerated right now.)

One week out from my Trans-Alberta adventure, I wasn’t sure if a big scrambling trip up Mount French was a good idea.  However, I had been eyeing this mountain for 3 years and if I was serious about it I likely wouldn’t have a better opportunity: the weather was perfect, the trip was being lead by experienced peakbagger Brandon Boulier, and we would be moving at a hiking pace so it shouldn’t be too intense.

I messaged my friend Philippe who always seems to be up for crazy adventures and he agreed to tag along.  Brandon brought along Sheena, another scrambler, which made our party a team of 4.  We arrived at the Burstall Pass trailhead at 5:30am, just as the sun was rising.  The views were already breathtaking.

The trail up to French glacier was recently maintained, with fresh flagging and much of the deadfall cleared.  It made for a very pleasant walk in the crisp morning air. 2 hours into our hike we had reached the toe of the French glacier. 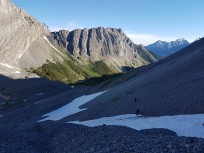 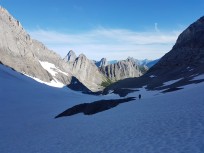 The snow was frozen hard and I’m a chicken so I immediately put on my microspikes.  Brandon is more confident that I and he was able to hike up without spikes and no issues.  The views opened up as we climbed up to the pass and when we crested the top I was blown away by what we saw!  The Haig glacier had been groomed for cross country skiing and there were about 20 skiers out for their morning workout.  I knew this facility existed, but seeing it in person was a whole new experience.  I would highly recommend  this hike to anyone who cares to put in the effort, just make sure you get there early before the snow gets slushy so that you can see the skiers. I promise you won’t regret it!

Now comes the part of the trip which I would not recommend to most individuals.  This route has a lot of hazards, and is only appropriate for experienced scramblers.

After ogling the skiers for a few minutes we began our ascent of Mount French.  The slope is very steep and loose, so we had to be careful not to kick rocks on each other.  The scree up to the summit ridge is horrible.  We did not find a good line and there was a lot of treadmilling going on.  At one point Sheena wondered if she was even moving at all.

Just as our frustration level with the scree was reaching a maximum, we crested the summit ridge and all of our effort was worth it for that view! 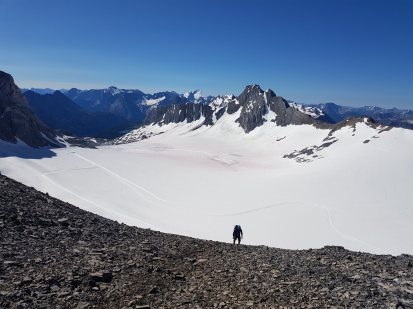 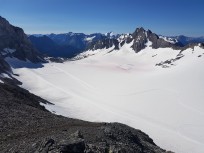 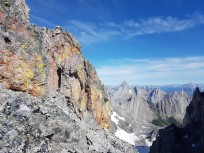 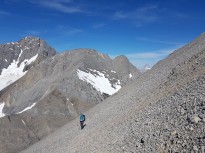 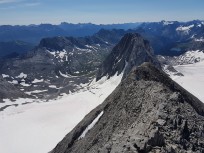 The summit ridge is narrow and very exposed at times.  The rock is loose and you must be careful to always push into the mountain instead of pulling on the rocks.  Route finding is very simple, in most cases you only have one choice for where to go.  The entire ridge is over 3000m, and I have not been in the mountains as much as usual.  I could feel that my heart rate was much higher than normal, but it’s hard to say if that was due to the altitude, or just adrenaline from the exposure.

Brandon on the false summit

Creeping along narrow sections of ridge

I felt surprisingly comfortable for most of the scramble.  Everything appeared worse than it was.  My least favourite section was not the narrow ridges, but rather a loose, narrow ledge we had to walk along.  I felt like someone should come up here with a broom and sweep all the loose rocks off.

The final challenge during our summit ascent was a short chimney.  We weren’t sure if it would be filled in with snow and ice, so we were happy to discover that you could ascend it by climbing on dry rock.

After snacks and photos on the summit block we made our way back. We were elated to have successfully navigated the ridge, but a little apprehensive about having to do it all over again in reverse.  The return trip on the ridge proved to be a little tougher – exposed downclimbs are always scarier than exposed upclimbs – but we all managed by taking it very slowly.

Cool rock formations, with Assiniboine in the background

The scree route down was much easier, and the rest of the trip was just a very nice walk down through the valley.  It was a hot day, and the mosquitoes were out in force so we did not lollygag. 12 hours after we started we were back in the parking lot, sunburnt and high on life.

It will be hard to top this trip, and I enjoyed it so much that I am pretty sure I will do it again.  Maybe as a point to point trail run via Turbine Canyon, just to keep things fresh.  Who wants to come with me?

If you followed along on any of my social media feeds, you will know that I did not make it across Alberta.  On the plus side, I did succeed in setting a new personal distance best of 210km.  I started to write a novel of a blog post outlining everything that happened on this adventure, but it was bland.  Instead, I’ll highlight some of my observations.

Gear and fuel (because people always ask me about this stuff).

And now, I will head back to my home in the mountains.

Please follow along as Dave continues to run across Canada at http://www.outrunrare.com

Ultrarunner and Mountain Lover. Want to see where I'm running? Check out my Strava profile

View of the North Fork of the Elbow. I can’t wait to visit those remote tarns! 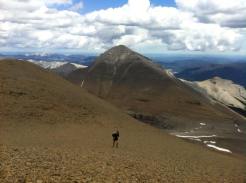 Glasgow in the distance

Our first view of Banded Peak as we scramble up Glasgow 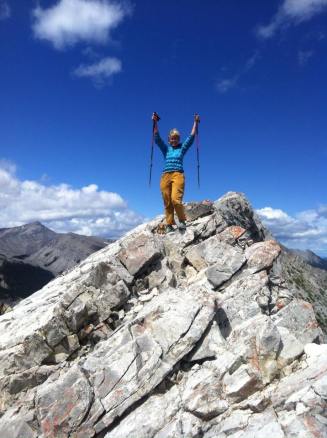 Hiking along the ridge on a very windy day 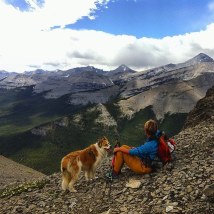 Breaktime for Mom and Hydro 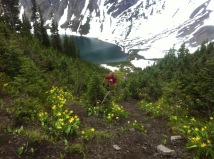 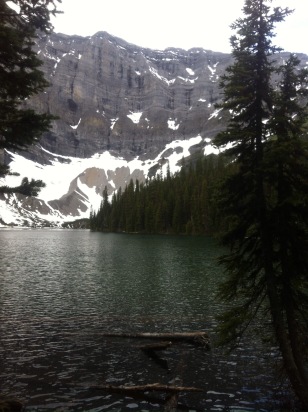 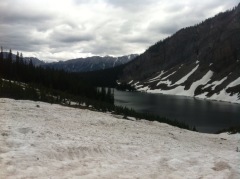 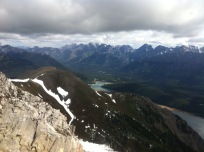 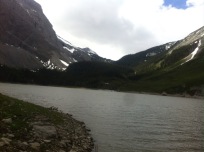 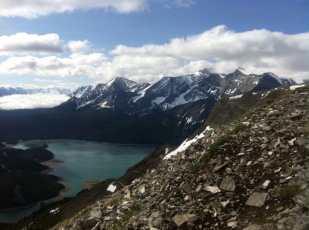 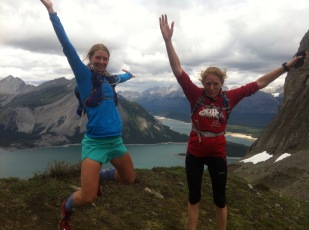 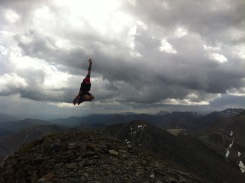 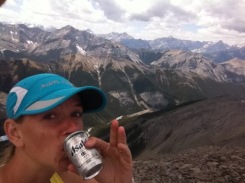 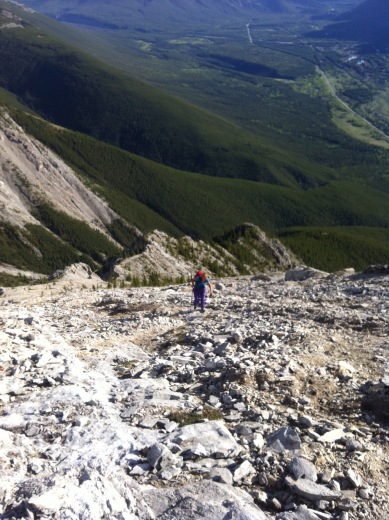 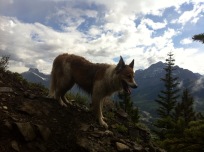 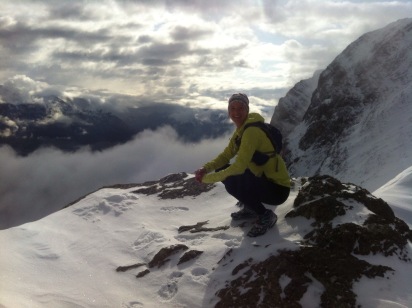 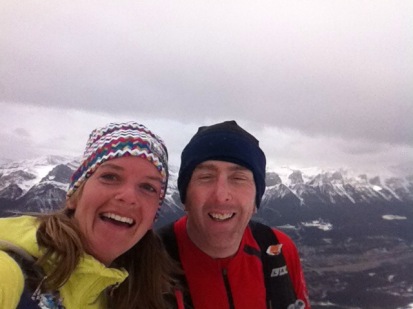 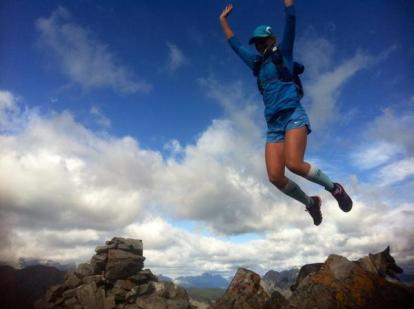 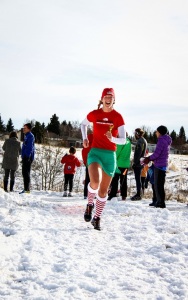 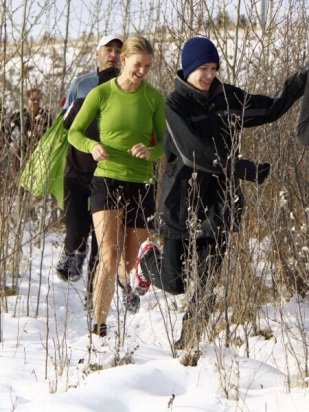 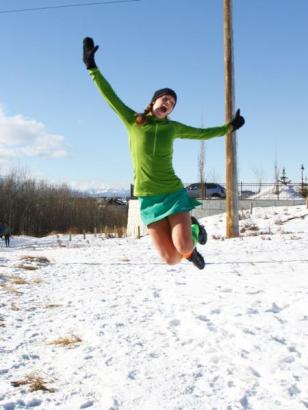 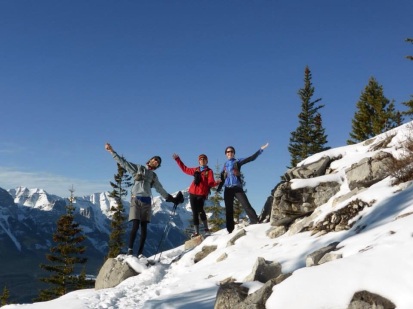 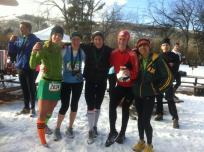